Live in Dishonor or die with Honor?

Captain Jean Bréaut des Marlots, wrote of his experience during the battle with a cuirassier regiment. 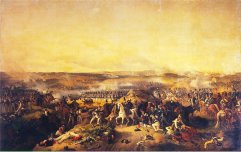 Battle of the Village of Borodino
by P Gess

“On every side one saw nothing but the dying and the dead.  Twice during the battle I went to look at the faces of the cuirassiers in my squadron to see which of the men were brave.  I was pleased and told them so on the spot.  When I rode over to congratulate one young officer (Monsieur de Gramont) on his good bearing, I witnessed some terrible things.  He told me that he had nothing to complain of and that all he wanted was a glass of water.  He had barely finished speaking when a cannon-ball cut him in two.  I turned to another officer and said how sorry I was about poor de Gramont.  Before he could reply, his horse was struck dead by a cannon-ball.  And a hundred other incidents of this kind.  I gave my horse to a cuirassier to hold for half a minute, and the man was killed.  I was covered with earth thrown up by shells, yet I escaped without the slightest scratch.  This is what gave me the coolness under fire which is so essential.  I said to myself: ‘It is a lottery whether you survive or not.  One has to die sometime.  Would you rather live in dishonor or die with honor?’  I had no difficulty in making my choice.  When one is brandishing one’s sword, when one is in action, the fire which tingles in one’s veins wipes out all thought.  Battle is often a game of prisoner’s base.  But to see death as almost a certainty, or rather wait for it, is often more than the human frame can stand, and I believe that philosophy alone has the power to set us above these troubles by revealing to us the nothingness of our being.”

This entry was posted in The Advance into Russia and tagged Antony Brett-James, Borodino, Captain Jean Breaut des Marlots, cuirassiers. Bookmark the permalink.