Faber du Faur painted a scene of the aftermath of the fire in Moscow accompanied by this description:  “On the 14th our troops had made their way over the heights before Moscow.  From there they looked down on the thousand golden domes of the magnificent city of the Czars. In the centre of the city we could see the Kremlin.  The city was shrouded in silence; a mute canvas lay before us.  No smoke rose from the city’s chimneys, no curious inhabitants came to stare at the victorious foreigners, no deputation came to implore mercy from the vanquishers.  Moscow, just like Smolensk, Dorogobouye, Viasma and the others before it, had been abandoned by its inhabitants and Murat, with his cavalry corps, trailing the Russian rearguard through the city’s streets, heard noting bu the echo of his horses’ hooves.” 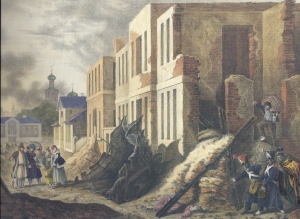 Moscow, 24 September
by Faber du Faur
Note the melted copper roof
in the middle and the body
near the soldiers

“Our arrival was the signal for the fire.  On the night of the 14th to 15th the Russians set fire to a number of areas but seemed to concentrate on the shops in the Chinese quarter.  Despite every effort to put out the conflagration, the fire raged until the 19th, and on the 20th the catastrophe was complete.  Two-thirds of the city’s buildings were now nothing more than heaps of ashes.  Moscow became the grave of our every hope.  There was an odious and penetrating smell of burning infecting the air; tracts of land contained nothing more than rubble and ashes, collapsed roofs and corpses.  Few areas had escaped from the fire and perhaps only the Kremlin, and a handful of suburbs, along with a number of palaces, churches and monasteries, had been spared and served as oases in this desert of ash.”

“Here and there groups of unfortunate inhabitants could be seen wandering in the grim labyrinth, hoping to discover that some part of their home had escaped destruction or to dig up some miserable food in order to prolong their unhappy existence.  Our troops were everywhere, hoping to discover some trophy and, like children, satisfy their greed with some bauble, only to discard it as soon as they came across some other novelty.  Few – too few – took the opportunity to prepare themselves for the encroaching Russian winter.  That which was valuable or useful was soon squandered, and order was only restored when it was too late, detachments being sent into the city with specific orders to procure necessities and supplies.”

With Napoleon in Russia: The Illustrated Memoirs of Faber du Faur, 1812, Jonathan North

This entry was posted in The Occupation of Moscow and tagged Major Faber du Faur, Moscow. Bookmark the permalink.