Faber du Faur captured an image from one of his last days in Moscow as preparations for departure were being made. 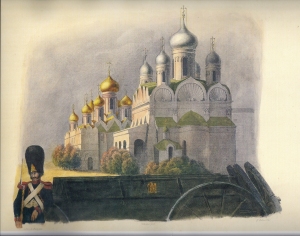 In the Kremlin, Moscow
17 October
by Faber du Faur

In the Kremlin, Moscow, 17 October
“Moscow boasts hundreds of churches, resplendent with gold, silver and brightly coloured, shimmering domes, earning for its city, the ancient capital of the Czars, the title of the City of the Golden Cupolas.  It is an astonishing sight, the only one of its kind, perhaps, in the entire world.  The city is a wonder to behold in the sunlight, particularly as you emerge from the forests to the west of Moscow, on the Mojaisk road.”

“In October 1812 the square to the east of the church was covered with hundreds of French and Allied caissons which, owing to the lack of draught horses, had been deposited within the Kremlin’s walls.  The square was so congested that it was in fact rather difficult to find a suitable position from which to draw.”

“The caissons were abandoned when we commenced our retreat and gunpowder from them was later used for blasting mine galleries beneath the Kremlin.” 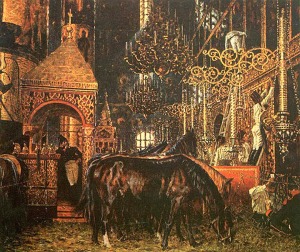 Horses in the Assumption Cathedral 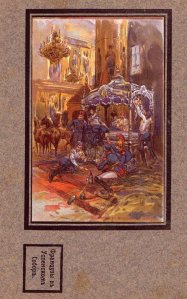 and was completed in 1327.  Struck by lightning in 1492, it was rebuilt in 1519 by Grand Duke Ivan Ivanovitch.  The interior was decorated by gold-leaf frescos commissioned by Czar Ivan Feodorovitch in 1692, and Catherine II restored the Church in 1773.”

Sources:
With Napoleon in Russia: The Illustrated Memoirs of Faber du Faur, 1812, Edited by Jonathan North