While it had snowed a few times since the occupation of Moscow, it had always melted away.  November 6, 1812 is the first snowfall that stays. 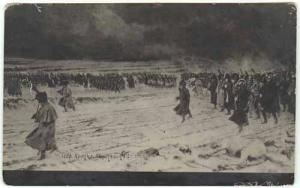 A Scene of the Retreat from Russia

Philippe-Paul de Ségur describes the first snowstorm, “On the sixth of November the sky became terrible; its blue disappeared.  The army marched along wrapped in a cold mist.  Then the mist thickened, and presently from this immense cloud great snowflakes began to sift down on us.  It seemed as if the sky had come down and joined with the earth and our enemies to complete our ruin.  Everything in sight became vague, unrecognizable.  Objects changed their shape; we walked without knowing where we were or what lay ahead, and anything became an obstacle.  While the men were struggling to make headway against the icy, cutting blast, the snow driven by the wind was piling up and filling the hollows along the way.  Their smooth surfaces hid unsuspected depths which opened up treacherously under our feet.  The men were swallowed up, and the weak, unable to struggle out, were buried forever.”

“Russian winter in this new guise attacked [the soldiers] on all sides; it cut through their thin uniforms and worn shoes, their wet clothing froze on them, and this icy shroud molded their bodies and stiffened their limbs.  The sharp wind made them gasp for breath, and froze the moisture from their mouths and nostrils into icicles on their beards.”

Colonel Lubin Griois, commander of the artillery in the 3rd cavalry corps recorded how he spent the night of the first snow: “The only shelter near the place I had halted in was a sort of barn open to all the winds and its roof supported by four posts.  This lodging seemed to me excellent by comparison with those I had had for a long time past.  I had a large fire built in the centre and lay down to sleep beside it, surrounded by my horses.  But during the night snow began to fall heavily, and the wind blew it under the roof with such force that when I woke up at daybreak I was covered in snow, as was the whole landscape. The snow had hardened and was all frozen.  Winter had fallen on us with full severity and was not going to leave us.”

This entry was posted in The Retreat from Moscow and tagged Antony Brett-James, Colonel Griois, Philippe-Paul de Segur, snow. Bookmark the permalink.