“The Gates Were Closed Against Them”

Philippe-Paul de Ségur describes the arrival of the army at Smolensk on the 9th of November, 1812.  After marching for weeks, they had finally arrived at the place where they thought food and shelter would be found.  Readers will recall that Smolensk was the walled city the French had captured in August after the city burned in a raging inferno.

“At length the army came within sight of Smolensk again. The soldiers pointed it out to each other. Here was the end of their suffering, here was the land of promise where famine would be changed to abundance, and weariness would find rest.  In well-heated houses they would forget the bivouacs in sub-zero cold. Here they would enjoy refreshing sleep, and mend their clothes, here shoes and uniforms adapted to the Russian climate would be distributed among them.”

“At the sight of the city only the corps d’elite, reduced to a few soldiers and the required officers, kept their ranks. All the others dashed madly ahead. 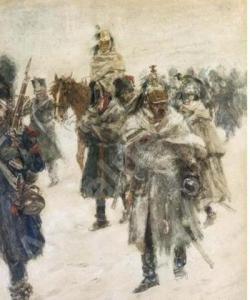 Thousands of men, mostly unarmed, covered both the steep banks of the Dnieper, crowding together in a black mass against the high walls and gates of the city.  But the unruly mob, their haggard faces blackened with dirt and smoke, their tattered uniforms or the grotesque costumes that were doing the duty of uniforms – in short, their frenzied impatience and hideous appearance frightened those inside. They believed that if they did not check this multitude of hunger-maddened men, the entire city would be given over to lawless plunder.  Therefore, the gates were closed against them.”

“It was hoped also that by such rigorous treatment these men would be forced to rally.  Then, in this poor remnant of our unfortunate army, a horrible conflict between order and disorder took place.  In vain did the men pray, weep, implore, threaten, try to batter down the gates, or drop dying at the feet of their comrades who had been ordered to drive them back; they found them inexorable.  They were forced to await the arrival of the first troops still officered and in order.  These were the Young and Old guard; the disbanded men were allowed to follow them in.  They believed that their entrance had been delayed in order to provide better quarters and more provisions for these picked troops.  Their suffering made them unfair, and they cursed the Guard…  The only answer that could be given them was that it was necessary to keep at least one corps intact, and that preference must be given to those who would be able to make the most powerful effort when the occasion required it.”

This entry was posted in The Retreat from Moscow and tagged hunger, Imperial Guard, Philippe-Paul de Segur, Smolensk. Bookmark the permalink.