“The Frightened Inhabitants Bolted Their Doors”

Faber du Faur continues with his narrative of the arrival of the army at Vilna: “On the 9th the bulk of the army, some 40,000 desperate men, arrived before Vilna in a state of the most abject confusion.  Pursued by Russian columns, they threw themselves into the town, although thousands were crushed to death at the gates.  Just as at the Beresina, a crowd of deranged, desperate individuals, trampling the dying underfoot, stormed forward in an attempt to get into the safety of the town’s streets.  The frightened inhabitants bolted their doors and refused entry to anyone.  It was a heart-rending sight to see the crowd of unfortunates  covered in rags, supplicating in the streets as the temperature dropped to 28 degrees.  In vain did they seek shelter; even the magazines were closed to them as written permission was required to enter therein.  Nor was there any room in the hospitals and barracks: these had long been filled to the brim, their long corridors and fire-less rooms choked with the dead and dying and presenting a picture of utter horror.” 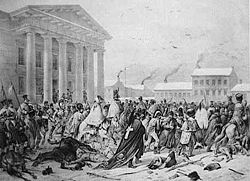 French Army in the Town Hall Square of Vilnius, Lithuania

“The Jews behaved badly towards us.  Whilst the Allied army had still been present in force, they came and offered their services and goods and even invited individuals into their houses.  However, as soon as news of the Russian approach was received they threw Allied troops out into the cold streets, thereby seeking to ingratiate themselves in the eyes of the victors.”

“Amidst all the scenes of horror and destruction, the rumble of cannon was a timely reminder that we had to quit the town at once.  The Russians were attacking our rearguard, and no sooner had we left from one side of the town, on the 10th, than the Cossacks entered the other.  The Grande Armée resumed its march, heading towards Kovno.”

This entry was posted in The Retreat from Moscow and tagged Cossacks, faber du faur, Vilna. Bookmark the permalink.