Well, maybe not the final post, but close to it.  With the end of the 200th anniversary of the Russian campaign, I will no longer be making regular posts.  Starting in May of 2011, I’ve been attempting to bring the stories of the participants in this disastrous campaign to life.  This is post number 238 during that period.  In 2012, the bicentennial of the campaign, there have been posts on 117 days of the 175 day campaign (67%)(some of the posts are enhanced re-posts from 2011 – the 199th anniversary).

Wherever possible, I matched the date of the eyewitness account to its 200th anniversary to give the reader as much of a connection with the participants as possible.  The goal was to make the reader feel a part of the event.  As a result, I’ve mostly ignored the strategy and concentrated on the human aspect.  My favorite post was about a lost glove.  Something so simple could have tragic consequences.

This blog is the result of research I did to write a work of historical fiction for middle school readers.  While the hero of my book, Henri Carle,  is only 14, many adults have read the story and found it entertaining.  If reading this blog has put you in the mood for a good Russian campaign adventure story, order yourself a copy of Russian Snows: Coming of Age in Napoleon’s Army and enjoy it some night this winter in front of a warm fire.  You’ll probably recognize a few of the scenes in the book as they were inspired by eyewitness accounts.

Another interesting thing that came out of the writing of Russian Snows, was that  a fellow re-enactor pointed out that a veteran of Napoleon’s Russian campaign is buried at a local church, only a few miles from where I live in southeastern Pennsylvania, USA.  While I have made no attempt to verify the validity of the veteran’s claim, here is the little bit of the story that we know according to a pastor who was giving his recollections many years later.

“Among the interesting reminiscences is the life and character of Father Knapp.  He was quite up in years when I became pastor in 1865.  He died about thirty years ago, aged eighty-four.  In character he was sturdy and pronounced. 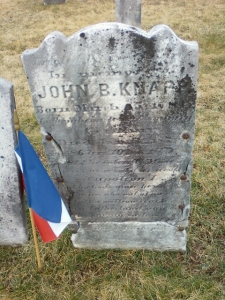 Outspoken candor marked all his doings.  Between opinions he never halted.  He was in Napoleon’s Russian campaign.  Often he was near that august personality; had brought him dispatches; taken orders from him to others, thus had business acquaintance and conversation with him.  To hear him talk seemed like a dream.  It seemed so strange to speak with a man who had personally spoken with Napoleon.  About the horrible campaign he could talk by the hour.  Incident and general movements he remembered well and stated them vividly.  I delighted to listen to him.  His frequent nearness to the great emperor gave him opportunities of knowing things.  His statements came with authority.”

Thank you to Lee Wessner for providing the text and photo about John Knapp.

Thank you to everyone who has read this blog.  I hope it serves as a reference for years to come.

This entry was posted in Uncategorized. Bookmark the permalink.