“More Than Equal To The Russian Troops”

Faber du Faur arrived at Krasnoi on the night of the 15th and described the accommodations and the situation the army found itself in. 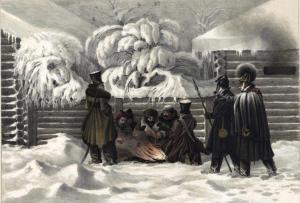 Camp at Krasnoi, 16 November
“We had forced our way through the Russians and reached Krasnoi as night fell.  The Young Guard, under [Édouard Adolphe] Mortier, was stationed on the road to Korythnia whilst Imperial Headquarters and the Old Guard, which still counted some 5,000 men in its ranks, occupied the little town and filled every house.  Everyone else, including ourselves, had to make do with whatever shelter they could find in the streets and gardens and considered themselves lucky if they were able to warm themselves by a fire.  This is how we spent the night.  We awoke on the morning of the 16th and only then did we appreciate the losses of the day before – men were missing, equipment and matériellost – and the danger we were now in as Kutuzov’s 90,000 Russians had

cut all apparent means of escape.  Before us the road to Gadi was occupied by Russians, the bulk of their army lay on our left flank and Miloradovich was on the Krasnoi-Korythnia road, barring our retreat to Smolensk and preventing us from linking up with Eugène, Ney and Davout, whose troops still lay around that town.  However, we were not disheartened for we placed our confidence in Napoleon and were convinced that, however we might fare against the Russian climate, we were more than equal to the Russian troops.”

“We spent the whole of the 16th waiting for the three army corps to come up from Smolensk and making demonstrations against the Russians around Krasnoi.  The boom of cannon and the rattle of musketry resounded around this little town throughout the day.  During the night of 16/17 November the guard managed to extricate Eugène and the remains of his corps.  But as Ney and Davout had not appeared by noon on the 17th, and fearing that we had remained too long at Krasnoi, and that the defile to Orscha might be cut, we began to march off towards Lyadi.  Thus the Imperial Guard marched out of Krasnoi and attacked the Russians to our left; these quickly fell back.  All of a sudden all firing stopped and we were able to reach Lyadi without hindrance and without having seen or heard the enemy.”

Blogger’s Note: This is the 200th post on this blog (including re-posts from 2011).  Thank you for reading!