As discussed in earlier posts, not all of the Grande Armée spent the winter inside the Moscow city limits.  Marshal Murat and about 25,000 men were 35 miles to the south of Moscow at Winkovo and they were starving.  An informal truce had fallen into place here.  Marshal Murat would even ride up to the Russian pickets and re-position them if he felt they were encroaching on the limits of the French camp.

Phillipe-Paul de Ségur describes the situation: “That armistice was an unusual one.  All that was necessary to break it was a reciprocal three-hour notice, and it applied only to the fronts of the two camps, and not to their flanks. At least, that is the way the Russians interpreted it.  We could neither bring in a convoy nor send out a foraging party without a struggle, so that fighting continued on every hand, except where it might be favorable to us.” 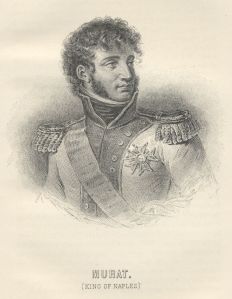 “… Murat took great pleasure in showing himself at the enemy’s outposts, reveling in the flattering looks which his fine appearance, his reputation for bravery, and his high rank won for him; and the Russian generals were careful not to do anything that would put him out of conceit.  They showered him with proofs of deference likely to preserve his illusions.  He ordered their mounted sentries about as if they were French, and when the portion of the field they were occupying suited him, they immediately surrendered it to him.”

“Some of the Cossack officers went so far as to feign enthusiasm, and to declare that they no longer recognized any other emperor than the one reigning in Moscow.  For a time Murat foolishly believed that they would never fight him again…  Napoleon was heard to exclaim as he read one of his letters, ‘Murat, King of the Cossacks! What foolishness!'”

Major Victor Dupuy of the 7th Hussars was an eyewitness to Murat’s boldness where the outposts of the two armies were 50 yards apart: “The King  of Naples [Murat], finding the Cossacks too close to us, go among them, and make them withdraw their sentries and show them where they ought to be.  The Russians obeyed.  Their generals, even those of the advance guard, whom we’d often had a chance to see, made no difficulties about yielding to the King’s least requirements.  He really had an air of commanding the whole lot of them.”

While this jockeying of the sentries was going on, the men and horses were starving.  Lieutenant Maurice Tascher  wrote in his diary about the, “extreme poverty of the army, which is living off vegetables, horse meat and unground rye.  In the forests the peasants are defending themselves against the soldiers when they try to get some food and forage.”

Dupuy records how each time the 7th Hussars assemble there are, “Unfortunate horses which, lying down and worn out, could no longer struggle to their feet and died on the spot.  Though Moscow was stuffed with victuals, the men were in the greatest need.  The King [Murat] wrote to the Emperor to inform him of our truly calamitous situation.  The Emperor interrogated the ordnance officer carrying the despatch who, to play the courtier, replied that we lacked for nothing – and that was a word too much!  The Emperor even got angry with the King of Naples for sending him a pack of lies.  This became quickly bruited abroad and the officer received all the reproaches and all the curses he deserved.  I shall abstain from giving his name.” 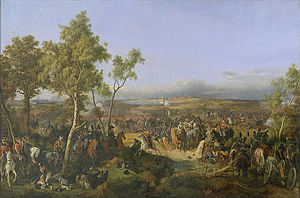 Jean-Roch Coignet of the Imperial Guard had been given dispatch duty at this time.  Assigned to one such mission he writes, “I was sent to a village, eighteen or twenty leagues from Moscow, to carry orders to Prince Murat.  I came upon a body of cavalry in retreat – our men, on bare-back horses.  They had been surprised while grooming their horses.  I could not find Prince Murat; he had run off in his shirt.  It was a bad sign to see those fine horsemen running for their lives.  I asked for the prince.”

“And I could learn nothing further.  The Emperor heard of it at once through [Étienne Marie Antoine Champion de] Nansouty‘s aides-de-camp, and on my return from this miserable mission, I found the army en route to aid Murat.  I was half-dead, and my horse could no longer walk…  The Emperor had ordered that his household and all his office staff should be sent from Moscow the 23rd of October, and join him at Mojaisk.  It is impossible to give any idea of the rapidity of the execution of his orders.”

“The preparations for this move were completed in three hours…   I got the provisions ready: about ten loaves of sugar, a good-sized box of tea, some elegant cups, and a copper to melt the sugar in.  We had a carriage-load of provisions.”

Murat, of course, had not been captured, but the French had been dealt an embarrassing blow at what was called the Battle of Tarutino.  An early morning attack had caught the French, complacent due to the informal truce and with many men out foraging, off guard.  Murat managed to stop the attack with a charge of curassiers which he personally led.  Losses for the French were 2,500 men, 38 cannon and baggage.

Posted in The Occupation of Moscow

Philippe-Paul de Ségur describes Napoleon’s tour of the battlefield the next day.  “The army was motionless until noon – or rather, one might have said there was no army, but only an advance guard.  The rest of the troops were scattered over the battlefield picking up the wounded, of whom there were more than twenty thousand.  These were carried five miles in the rear, to the great abbey of Kolotskoi.”

“Napoleon rode over the battlefield; there was never such a ghastly sight.  Everything contributed to the horror of it: the gloomy sky, the cold rain, the violent gale, the houses in ashes, the plain torn up, littered with ruins and debris. On the horizon the melancholy foliage of the northern trees; soldiers wandering among the corpses, looking for food in the very knapsacks of their fallen comrades; dreadful wounds (Russian bullets were larger than ours); cold campfires without song or tale; a tragic silence.”

“The dead and dying were particularly numerous at the bottom of the ravines, where so many of our troops had been hurled and others had draggged themselves to seek shelter from the enemy or the storm.  The youngest of them moaned out the name of their country or their mother.  The older men awaited death with either an impassive or a sardonic air, without condescending to beg or complain.  Some of the men asked to be killed at once, but we quickly passed these poor wretches by, knowing that they were beyond all hope, yet not having the heart to put them out of their misery.  One man, the most horribly mutilated of all (he had only his trunk and one arm left), looked so lively, so full of hope, even gaiety, that we undertook to save his life.  As he was being carried off the field he complained of pain in his missing limbs, a common occurrence among people who have had arms or legs amputated.  This seems to be a fresh proof that the spirit remains whole, and that feeling belongs to it alone, and not to the body which can no more feel than think.”

Even those unscathed in the battle are suffering.  Lieutenant Maurice de Tascher notes in his diary, “In the evening, a charge by the Prussians.  Pajol wounded.  Sept 10; Same circus as yesterday. But at least at 4 pm they halt and stand firm.  We get lost and trot until 9 pm.  Bivouac in a wood, without water, or bread, or forage.  Ate horsemeat, extreme misery.  The regiment reduced to six troops.  The Russians are burning everything, even the villages with their wounded in them. My spyglass is stolen.  Did twelve miles.”

Posted in The Advance into Russia