Faber du Faur’s description seems almost buoyant as he talks about the events depicted in the painting of December 2nd, 1812. 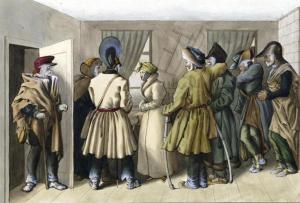 Between Pleszenitzy and Smorgoni,
2 December
The Beresina was behind us and we were happy to have marched over the series of bridges over the Zembin marshes.  Vilna, with its magazines and stores, was now the object of our attention   Those who could outstrip the army were sometimes lucky enough to find shelter in inhabited places.  Here we see some officers of the 25th Division in the room of a farmhouse; they probably still remember their pretty hostess who went by the name of The Carpenter’s Wife.

This entry was posted in The Retreat from Moscow and tagged Berezina River, Major Faber du Faur, Vilna. Bookmark the permalink.